A few years ago I visited the beautiful scottish city of Edinburgh. Apart from the old pubs, the whisky and its mighty castles, the city also have attractions for those interested in the art of illusion.  In a castle on one of the heights of the city, we can find an example of an ingenious yet simple optical technology, called the Camera Obscura. We have previously published an entry on the History of VR, where we discussed the invention of the Stereoscope as the first technology underpinning the VR of today. With a broader definition of VR, we could say that the Camera Obscura is an even earlier VR technology than the Stereoscope; in the mid 1600s,  by using the Camera Obscura, one could live stream a photographic segment of reality at much higher refresh rates than what we can do with information technology today.

The drawing above illustrates the workings of the Camera Obscura: In a dark room, the light from the world outside is directed by a mirror through a lens, which focuses the light on to a leveled surface. Often made of white stone, the surface functions as a canvas for the photographic reflection. As this is light straight from its source, the responsiveness is immediate and as the lens is continuously open, the pictures are moving. It is a very interesting experience to stay in the Camera Obscura of Edinburgh, and wholly undetected watch and perceive the actions of the masses of people walking the streets outside.

We should note, however, that even the mirrors and lenses are not necessary to create this effect. The camera obscura is in essence an extremely simple concept, and the simplest version of it is called a pinhole camera, which is as simple as a dark room with a hole for which the light to enter through. The light that enters through it represents what reflects it —which of course is the environment outside. As such, all light contains information, and pinhole cameras utilize this by letting the light enter through a small hole in a wall into a dark room, so the visual information can stand alone and be perceived relative to the dark background. In more complicated camera obscuras, lenses are used to strengthen and focus the light, and mirrors to redirect it.

As some may know, when light hits our eyes, the retina actually perceives the world upside down. Our brains, however, flips this back again — resulting in the world as you see it today. Traditional pinhole cameras or simple camera obscuras also suffer this effect, and so often the image is seen as upside down, as in the illustration above. In the Edinburgh Camera Obscura, they use lenses to maintain the normal orientation. Effectively, the image is inverted twice — once by the aperture, and further back using the lenses. For those who want to try to achieve this at home, we recommend this experiment, which highlights the workings of the lenses.

Another interesting use of the camera obscuras, and a source of their popularity, was for the art of drawing. By projecting directly to the canvas one is drawing on, the lines of the environment can be outlined more easily. What is becoming increasingly clear here, is the role of the camera obscura in the creation of the modern photographic camera. The technology is quite simply the same, only instead of a continuous stream of light to a canvas — we have a limited, controlled exposure to a surface that adapts to the light. It is related to this exposure where photography features make sense, such as aperture (how much light we let in); ISO (the sensitivity of the image sensor), and shutter speed (the amount of time that light should be let in). We are still playing with light and lenses.

The World of Illusions

If you visit Edinburgh to look at their old Camera Obscura from the 1850s, you will find in the same castle what they call «The World of Illusions»; five floors containing over 150 different optical illusions. Caleidoscope rooms; 3D stereoscopic mirrors; mazes of mirrors and much more. We will discuss and explain a few of these in more detail, the first being “The Ames Room”.

For the illsion of the Ames Room to work, you have to see it from a certain perspective, which in the above illustration is referred to as the viewing peephole. The Ames Room in Edinburgh, unlike in our illustration, also use floor tiles as in a chessboard to further improve the illusion, which from the viewing hole appears to be of similar size. The illusion is a funny one, and an obvious photo-opportunity.

Another illusion, which is more bodily, is their Vortex Tunnel. You are in a room, where a bridge connects the two ends. The task is to walk over the bridge (a fully stable, stationary bridge). Now, this shouldn’t necessarily be a problem, if it weren’t for the fact that the cylindric vortex walls are spinning around you. It doesn’t matter how hard you try, you simply can not walk a straight line: it is as if the gravity draws you toward the rails of the bridge. If you close your eyes, however, everything is fine.

Do you know of any other fun illusions or old optical technologies? Please comment below!

https://www.matrise.no/2018/07/camera-obscura-and-the-world-of-illusions/
Liked it? Take a second to support Matrise on Patreon!

1 thought on “Camera Obscura and the World of Illusions” 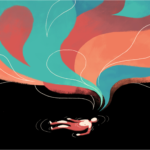